Historically, Tuscaloosa County is an active region in terms of extreme weather. The most common form of severe weather in this region is thunderstorms, which could contain high winds, lightning, hail, heavy rain, and even tornadoes. 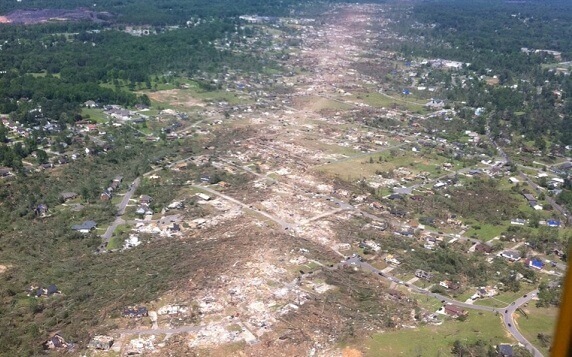 The county is no stranger to experiencing small, spin-up as well as large, long-track tornadoes in its long history.

For example, on April 27, 2011, a long-track, violent EF-4 tornado swept through parts of Tuscaloosa and Holt, including Rosedale, Forest Lake and Alberta, destroying 12 percent of the city of Tuscaloosa and causing approximately $1.5 billion in damage across Tuscaloosa and Birmingham. 53 deaths were attributed to the storm in Tuscaloosa an several hundreds were injured. This tornado was part of the deadliest tornado outbreak Alabama has seen since the Super Outbreak of 1932.

Speaking of 1932, a tornado of similar caliber struck Ralph, western portions of Tuscaloosa, and Downtown Northport. Tuscaloosa Country Club and Downtown Northport resembled a war zone, according to reports. According to the Tuscaloosa News, almost one hundred homes were destroyed, hundreds of other homes and buildings suffered significant damage, and at least 2,000 were left homeless. Across the state, 268 people died, and 1,874 were left injured, according to the Shelby County Reporter.

Other larger tornadoes have torn through Tuscaloosa County in the past and have caused damage through densely populated areas, like the 1997 Five Points tornado and the 2000 Englewood/Cottondale tornado, but most tornadoes have been EF-0 or EF-1 and have tracked though rural sections of the county.

Tuscaloosa County’s extreme weather is not just limited to thunderstorms and tornadoes. Other weather events have also occurred in and around the county in the past, but are not nearly as common as thunderstorms.

The county is close enough to the Gulf Coast to feel the effects of a hurricane and tropical storm, depending on the location of the landfall. In August 2005, Hurricane Katrina brought almost three inches of rain and nearly hurricane-force peak wind gusts to areas of the county (Vance had a report of 68 mph). Not even a month later, 10 small, short-lived tornadoes were reported in the outer rain bands of Hurricane Rita, with two injuries reported in the Buhl community. The last tropical cyclone to have a significant impact on this area was Tropical Storm Lee in September 2011, which brought peak wind gusts of around 50 mph and dumped over seven inches of rainfall on the area.

Hurricanes and tropical storms can strike the area about once every few years. If a hurricane was to make landfall along the Alabama, Mississippi or northern Florida Gulf Coast, then the storm will most likely weaken, but the primary threats will still be heavy rain, wind, flooding, and a few tornadoes.

Winter weather can also occur anytime from late November to mid-March. All forms of winter precipitation are possible — snow, sleet, freezing rain, etc. — but, Tuscaloosa averages only less than an inch of winter precipitation per year, and most winter weather events are minor. However, there have been times where Tuscaloosa has received well above the average amount of snow and ice. The Blizzard of 1993 brought almost four inches of snow to Tuscaloosa, and the 1992-93 winter is currently the third snowiest in Tuscaloosa history. In the snowiest season on record in 1959-60, Tuscaloosa received seven inches of precipitation.

If ground temperatures are below freezing and the roads are wet, ice will form and could spell disaster on the roadways, depending on the time of day. That is exactly what happened on January 28th, 2014. Late that weekday morning, temperatures were sitting well below freezing, and snow began to fall. Temperatures were projected to warm to above freezing, and no travel problems were expected. But, snow kept falling, and temperatures stayed well below freezing, leaving thick sheets of ice on the roads, and creating havoc on major thoroughfares across the Deep South. All in all, according to the National Weather Service, Alabama State Troopers responded to 731 vehicle accidents for the next three days, and nine were killed due to accidents caused by icy road conditions.

The Black Warrior River flows in between the downtown areas of Tuscaloosa and Northport, so there is a risk of river flooding. However, with the construction of dams and levees, major flood events have been very rare in recent years. 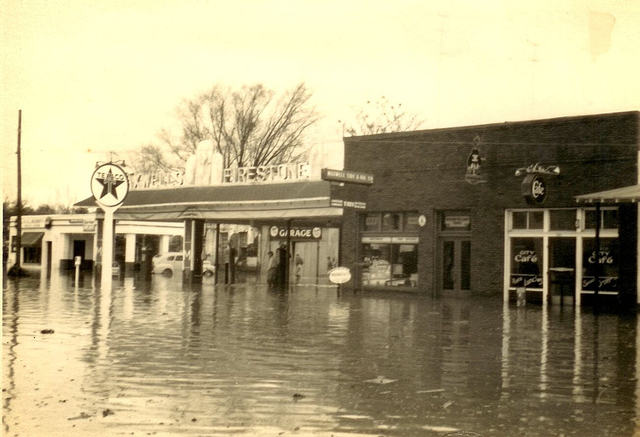