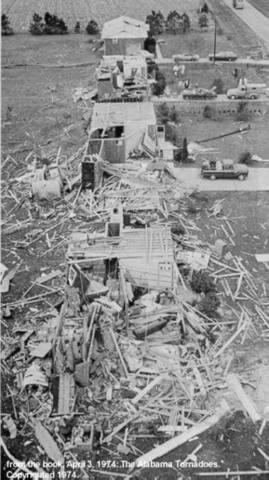 Damage in Limestone County, Alabama, after the 1974 Super Outbreak, one of the most devastating in U.S. history (Source: NWS Birmingham).

In the 1950s, there was a nationwide fear that the Soviets were going to bomb the United States and turn it into a Communist state. At the time, emergency management was focused on civil defense and preparing the country for a nuclear attack.

However, in the 1960s and early 1970s, a series of natural disasters struck different parts of the United States. Hurricanes Betsy (1965) and Camille (1969) battered the Louisiana and Mississippi Gulf Coast, and were both the costliest hurricanes at the time [both approximately $1.42 billion ($9.13 billion, 2015 USD)].

On February 9, 1971, a magnitude 6.7 earthquake shook the San Fernando Valley and Los Angeles area, killed 64 and severely impacted a number of facilities, including two hospitals and several schools. From Windsor, Ontario, Canada, to southeastern Mississippi, 148 tornadoes spun across the region in what what is known as the 1974 Super Outbreak, killing 319 people and causing more than $600 million (1974 USD) in damage in the United States.

These storms prompted Congress to pass the Disaster Relief Act of 1974, placing the Department of Housing and Urban Development in charge over natural disaster relief and recovery through two different organizations: The National Flood Insurance Program and The Federal Disaster Assistance Program. However, State government officials wanted to combine everything that falls under emergency management into one single agency.

A series of terrorist bombings (1993 – World Trade Center in New York City, 1995 – Alfred B. Murrah Federal Building in Oklahoma City) and attacks (September 11, 2001). This brought about heightened awareness of the 5th stage of emergency management – Prevention. 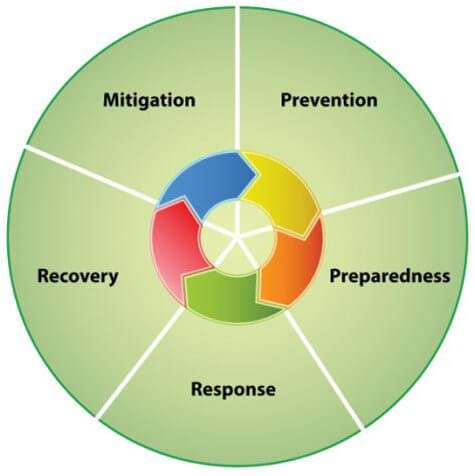